IoT from the Business Perspective

While much of the current reporting on IoT describes how life will change for the end user / consumer once IoT matures and many of the features and functions that IoT can enable have deployed, the other side of the coin is equally compelling. The business of IoT can be broken down into roughly three areas: the design, manufacture and sales of the IoT technology; the generalized service providers that will implement and operate this technology for their business partners; and the ‘end user’ firms that will actually use this technology to enhance their business – whether that be in transportation, technology, food, clothing, medicine or a myriad of other sectors.

The manufacture, installation and operation of billions of IoT devices will be expensive in its totality. The only reason this will happen is that overall a net positive cash flow will result. Business is not charity, and no matter how ‘cool’ some new technology is perceived to be, no one is going to roll this out for the bragging rights. Even at this nascent stage the potential results of this technology are recognized by many different areas of commerce as such a powerful fulcrum that there is a large appetite for IoT. The driving force for the entire industry is the understanding of how goods and services can be made and delivered with increased efficiency, better value and lower friction. 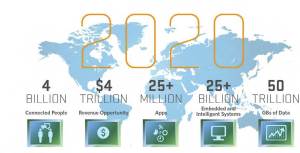 As the whole notion of IoT matures, several aspects of this technology that must be present initially for IoT to succeed (such as an intelligent network, as discussed in prior posts in this series) will benefit other areas of the general IT ecosystem, even those not directly involved with IoT. Distributed and powerful networks will enhance ‘normal’ computational work, reduce loads on centralized data centers and in general provide a lower latency and improved experience for all users. The concept of increased contextual awareness that IoT technology brings can benefit many current applications and processes.

Even though many of today’s sophisticated supply chains have large portions that are automated and are otherwise interwoven with a degree of IT, many still have significant silos of ‘darkness’ where either there is no information, or process must be performed by humans. For example, the logistics of importing furniture from Indonesia is rife with many handoffs, instructions, commercial transactions and so on that are verbal or at best hand written notes. The fax is still ‘high technology’ in many pieces of this supply chain, and exactly what ends up in any given container, and even exactly which ship it’s on, is still often a matter of guesswork. IoT tags that are part of the original order (retailer in Los Angeles wants 12 bookcases) can be encoded locally in Indonesia and delivered to the craftsperson, who will attach each one to the completed bookcase. The items can then be tracked during the entire journey, providing everyone involved with a greater ease and efficiency of operations (local truckers, dockworkers, customs officials, freight security, aggregation and consignment through truck and rail in the US, etc.)

As IoT is in its infancy at this stage it’s interesting to note that the largest amount of traction is in the logistics and supply chain parts of commerce. The perceived functionality of IoT is so high, with relatively low risk from early adopter malfunction, that many supply chain entities are jumping on board, even with some half-baked technology. As was mentioned in an earlier article, temperature variations during transport are the single highest risk factor for the delivery of wine internationally. IoT can easily provide end-to-end monitoring of the temperature (and vibration) for every case of wine at an acceptable cost. The identification of suspect cases, and the attribution of liability to the carriers, will improve quality, lower losses and lead to reforms and changes where necessary in delivery firms to avoid future liability for spoiled wine.

As with many ‘buzzwords’ in the IT industry, it will be incumbent on each company to determine how IoT fits (or does not) within that firm’s product or service offerings. This technology is still in the very early stages of significant implementation, and many regulatory, legal, ethical and commercial aspects of how IoT will interact within the larger existing ecosystems of business, finance and law have yet to be worked out. Early adoption has advantages but also risk and increased costs. Rational evaluation and clear analysis will, as always, be the best way forward.

The next section of this post “The Disruptive Power of IoT” may be found here.